Even though the components used in the new C.U.B.E. 150 have been in rental duty for over 15-years, we wanted to put this equipment to some rigorous testing. There are units being field-tested in California and Oregon. These won’t look as pretty as your C.U.B.E. 150, but we told these users to work them hard and give us good feedback…Keep checking our website as we update the projects that use the C.U.B.E 150. 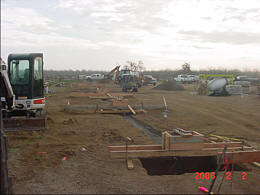 for the use of the C.U.B.E. 150 was to reduce the cost of ready-mix at this remote site. The contractor did the excavating and forming with four men and intended on using all four for the concrete mixing and distribution portion of the project.

As it turned out, he only needed three men for the ready-mix work. He used two 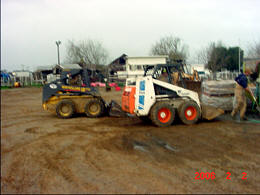 skid steers and one backhoe for raw material feeding and concrete placement. This allowed him to keep a continual flow of duties going all day. On the first portion of the project, the crew mixed and placed 48-yards in a day and a half of work.

The contractor reports;
“The C.U.B.E. 150 really surprised us on how it just
kept cranking out the material for us. We had tractors going every which way and the C.U.B.E. 150 never slowed us down”. 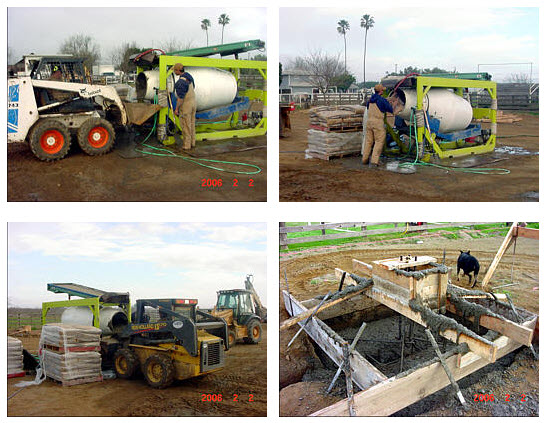 The five-yard pours were required so that ranch equipment could be moved between sections and then moved onto the cured concrete. The Project spanned three weeks between other work projects.

“The C.U.B.E. 150 worked great for my needs. I could only pour a few yards before moving equipment between the individual stalls. A transit-mix truck would have been tough to schedule and the C.U.B.E. 150 let me mix when I needed it”.

The farm owner used a single loader to fill the drum and for concrete placement. His wife, son, and father worked as his mixing crew. 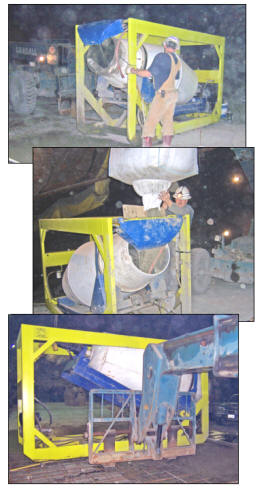 The Teck Cominco Mine in Northern Washington needed several concrete slabs poured approximately 7.5 miles underground. They tried a contractor mixer and 80# pre-mixed bags of concrete. But with about 100 yards to pour, it became apparent that they would never make their deadlines and would wear-out several employees. They contracted with a site-mix concrete company to solve the problem. And the solution was a combination of the C.U.B.E. 150 and pre-mixed concrete in super sacks. Super sacks of the dry mix were delivered to the C.U.B.E. 150 deep in the mine.

“It saved us a lot of hours over our previous mixing method… It saved us so many manpower hours!”

The C.U.B.E. 150 conveyor was removed so that they could load super sacks and they ordered the optional diesel engine. The crew used a large Gradall to move the C.U.B.E. 150 from the material loading area out over the forms to pour the 13-yards per slab. Using the super sacks allowed them to get the specification mix down to a yard every six minutes.
“By utilizing the C.U.B.E. 150 the bid was completed successfully and the job completed quickly”.

The C.U.B.E. 150 was moved down into the mine in the bed of a one-ton long-bed pick-up. Because the C.U.B.E. 150 is only 4 feet wide it easily slips between the wheel wells of the truck. With the tailgate down and proper safety marking, the unit can be transported hundreds of miles this way. Unloading the truck was accomplished by forking or hoisting from the top rails or the lifting corners.

“ The C.U.B.E. 150 worked just fine. It is a good size for working underground and we mixed 98 yards without any breakdowns!”

By comparison, it took 7 hours to pour 6 yards with the contractor mixer using 80# bags. Using a small contractor mixer left no time in the day to set forms and rebar for the next pour, wasting an extra day. Using the C.U.B.E. 150 allowed for more than twice the volume of ready-mix to be poured in a shift with enough time left over to do the form sets and steel for the next slab!

A contractor building a resort on a remote island had a problem producing concrete for footings and grouting blocks. No ready-mix availability meant using a 1/3 yard portable mixer and losing valuable time.

In addition, he could not get the consistent concrete strength that was demanded by the project. Using the C.U.B.E. 150 he can produce over 15 yards a day and has completed cylinder tests to find a consistent 3800 PSI in 8-days.

“The only way we can get concrete on this small island is by mixing it by a smaller machine. I get 15 yards per day with the C.U.B.E.150. I could never do that with a 1/3 yard Machine”.