The short-load industry in transition

The tub trailer was the staple of short-load concrete delivery between the 1970’s and the beginning of the 21st century. In 1998 engineers disrupted the tub trailer design by placing a 1-yard mixing drum on the trailer framework. Over the next 10-years a transition from tubs on wheels to mixers on wheels began to unfold. By 2010 the trailer-based concrete business had tipped from tubs to drums.  By 2011 there were more drum mixers to be found in Cart-Away and U-cart locations than there were old tub trailers. Locations with old U-cart trailers would loose customers to their competitors who offered the quality concrete from a Cart-Away mixing drum.

Tub trailers were really just a big steel gravy boat on wheels. The shortcoming of the tub was the extreme settling of the concrete mix as the trailer was jarred over bumps in the road. It was common to need to use a shovel or a hoe to remix the concrete once you reached the job site. The quality of this ready-mix was always suspect, so it was rarely used for very important concrete projects. The other issue was that it had a hand jack that was used to tilt the tub to dump. Between remixing and hand jacking, the tub trailer was a great cardio workout, but not great for delivering quality concrete. 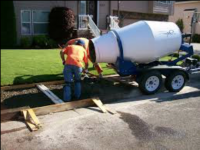 The dawn of the mixing trailer had eliminated the remixing and manual tilting overnight.  A Cart-Away mixer had a dependable Honda engine to power all of the hydraulic functions like spinning to dumping. The turning drum mixed concrete just a good as what you could get from a ready-mix truck.

As the new technology in short-load delivery proved itself better, the tubs started to be replaced. In 2020 the tub trailers are mostly rusting away in back lots or have been converted to material dump trailers.  The U-cart tub trailer business declined and was eventually sold to Cart-Away in 2016. There are still some locations that have tubs, but we only make a few each year to support these customers.

Today there are thousands of Cart-Away mixing trailers that pour concrete in communities all around North America. We tip our hat to the tub trailer and acknowledge with gratitude the gravy-boat work they accomplished in the short-load delivery industry.